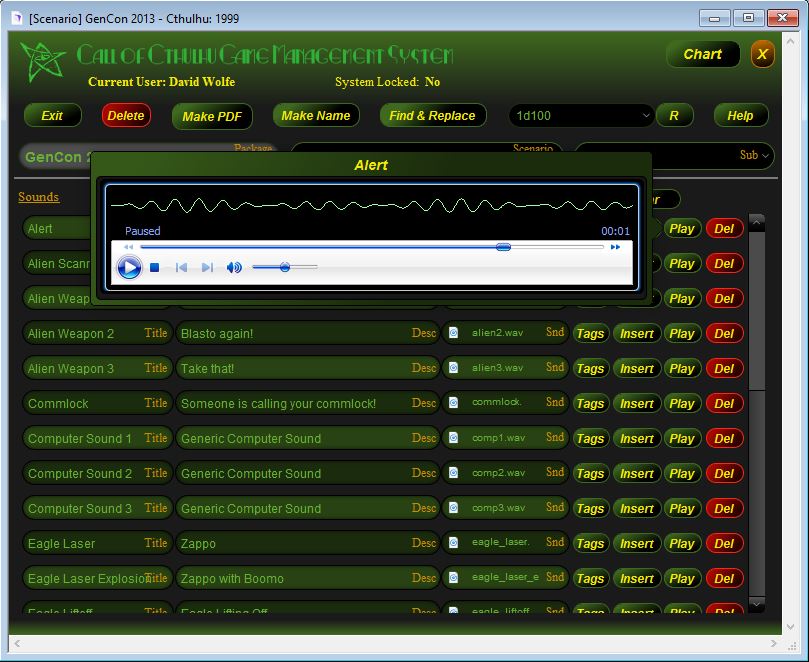 Scenarios can have sound boards created for them to give the keeper some audio options he or she can play for the players when the time comes.  Since sounds are mostly used in conjunction with scenarios, sound clips are not stored in catalogs but directly with the scenarios they are used in.  The main "Sounds" area of a scenario is the storage point for sound clips but individual sounds can be linked to specific scenario parts where they are most like to occur and can be played from the scenario parts.

Sounds can be played on all versions of the CoCGMS, the Windows, Mac and iPad versions.  If you're using a bluetooth speaker with your iOS device you can easily play clips for your players at the right time.

The Dialog section of a scenario part can contain audio clips as well.  Container fields (the fields that contain binary data in a FileMaker database) in FileMaker Go (iOS) have additional controls allowing you to record audio directly into the container from the device microphone.  This makes it easy to pre-record dialog clips into the system to be ready for playback during game play. Got a friend with a good voice?  Make them record your character dialog.  I wish had a friend that sounded like Boris Karloff...